The Mac users I support have admin rights, and I have recently had cause to provide end users with an easy way to run various shell commands which require admin rights (via sudo). My aim was not to have to repeatedly send support emails or provide articles which require users to open Terminal and type in one or a more commands.

If you are using Jamf Pro and your users are familiar with using the Self Service app, you can create self-service policies which run scripts with admin rights.

Shell script in a Payload-free Package

If you aren’t able to or do not wish to use Self Service, another method is to package up a shell script in a payload-free package, which will prompt the user for admin rights when they “install” it. But it is a little abstract for users to “install” something when they just want to run a tool.

Shell script in an Application

The obvious answer is to wrap the script in an application, which is pushed to their Mac. The user can just double-click on the application and the commands are run silently. If an input is required, then a GUI is required. I am not yet familiar with Swift or making Cocoa applications, but for something as simple as running a few shell commands, AppleScript dialog boxes are sufficient.

However, if the shell script contains sudo commands, it will fail to run. One can wrap each shell command in an AppleScript command such as:

This quickly becomes messy to program when there is more than one sudo command, and it can be difficult to find the right escape characters for more complicated shell commands, such as those which contain regex, awk and sed.

I found a solution in the command sudo -S:

This means that one can echo the authentication password to stdin, and pipe that into the sudo command. The password can be obtained from an AppleScript dialog box.

I prepared a template which can be used at the beginning of any script to obtain the logged in user’s password and place it in the variable $authPass. It checks that the username and password are correct, and have admin rights.

Wherever sudo is required, replace it with echo $authPass | sudo -S. The template creates a function which replaces the stock sudo command.

Note: There are obvious dangers with echoing an administrator password, so one should be careful with the scripting: for instance definitely do not set -x.

The script can be written in your favourite text editor. Then, to create the app, open Automator, add the action “Run Shell Script” to the workflow, and copy-and-paste the script into the box. Once saved, add an icon to make the app appropriate for your organisation.

I link to a number of these types of apps from the Hello-IT status bar application, in order to provide self-help tools to end users.

I have used this method for various simple self-help and IT Support applications, and will blog about them in the future. They show a variety of ways to use an application that runs commands with sudo.

As a simple example, here is an application script that checks for connection to the JSS, and if successful, runs jamf manage and jamf policy: 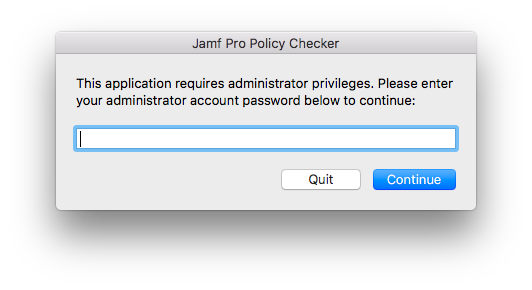